Bedding is oh so Important! 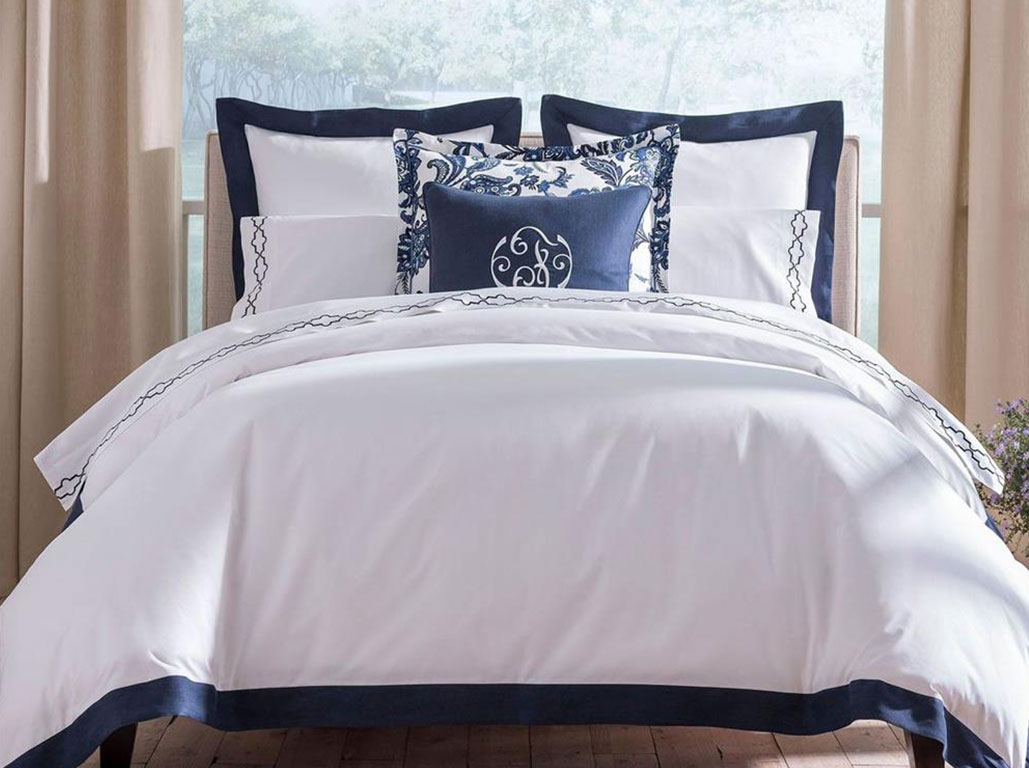 When thinking about bedding there are endless possibilities. The trend of the time is to have simple bedding with a “centerpiece” boudoir pillow. The boudoir pillow could be as simple as the above photo with a 15 x 22 pillow or you can go to a larger 15 x 50” pillow. Just remember pillows are measured from seam to seam, not the actual space they take up. The rule of thumb is to go 2” bigger than the seam to seam to scale what space it will actually take up.

When specifying bedding there are many terms you need to familiarize yourself with. Let’s begin with that not all beds are created equal. What I mean by that is there is no longer a standard bed. Pillow top mattresses and Bunky Board box springs have made it so that each bed truly should be measured before estimating fabric or labor cost. The motorized beds with the lift system creates a challenge for dust ruffles.

Let’s talk about the coverlet versus the comforter versus the bedspread versus the duvet and all that goes along with those choices.
A coverlet is a bed cover that is either quilted or tacked. A coverlet does not go to the floor but just past the dust ruffle or bed rails. It can have a pillow tuck (will discuss later) or stop at the headboard of the bed. It can be hemmed or have a decorative cord around the edge. A coverlet is lined with drapery lining unless you want to provide a contrast fabric to line it with. Typically the corners at the foot of the bed are rounded. A coverlet can have cut out corners with gussets should your bed have bedpost or you want a more tailored look. ( will explain later)

A comforter is the same as above. It does not go to the floor but hangs just past the dust ruffle or rails around the bed. It is typically quilted. There is a face fabric and decorative back fabric. This is reversible. A coverlet has two separate pieces that can be quilted in different patterns. The decorative cord is pillowcased between the two fabrics to allow it to be reversible.
A fitted coverlet or spread has a cord around the perimeter of the mattress. The corners have gussets. A gusset is a piece of fabric that is attached to the back of the spread or coverlet to cover the mattress. The fitted coverlet or spread is the best choice for day beds or beds with a post.

A duvet cover is a cover for a comforter. This comforter is typically one made of down or faux down and is store-bought. The duvet cover is made with a designer fabric top & bottom. The edge may be corded or not. We add eight ties in the inside of the duvet and will add them to your insert to keep the duvet in place. You may specify button closure or a zipper closure.

A pillow tuck is the extra length added to the bedspread or coverlet so that you can fold the spread around your pillows. We typically add 30” to accommodate four sleeping pillows.
A reverse sham is best explained by thinking of how you usually make a bed. You take the spread, cover the bed, fold back the top, put pillows in place, then fold the spread over the pillows so the edge of the spread faces the headboard. With a reverse sham, you do the same first two steps, but before folding back you stick the pillows in, then fold the spread up and over them in the reverse direction. This allows it to be easier to make the bed. With the reverse sham, you have the option of tucking or not tucking. A decorative welt can be added to the edge so you do not have to tuck.

The term “drop” refers to the length of overhang of your bedding. A typical bedspread has a drop to the floor. A coverlet drops to just below the mattress & is usually used with a decorative sideboard or a dust ruffle. Some beds may need an unusually long drop either because they are extra high vintage style beds or because they have an extra thick mattress. The term “drop” is also used in specifying dust ruffles. You must measure the bed for the width and length of the mattress to determine the drop on your spread, coverlet or duvet.

Pillow shams are a good idea if your bedspread has no pillow tuck They can be made to match your spread or in a contrasting fabric. They are available in three styles: plain, corded edge & flanged. We typically stuff and close our shams with an invisible zipper. They can be made in standard or custom sizes. You will need to decide on the type of fill you want in your shams. The choices area Faux down, 95/5 down, 90/10 down, or polyfill. Upon ordering shams you need to request the fill you desire. In another blog, I talk about pillows and all the possibilities. 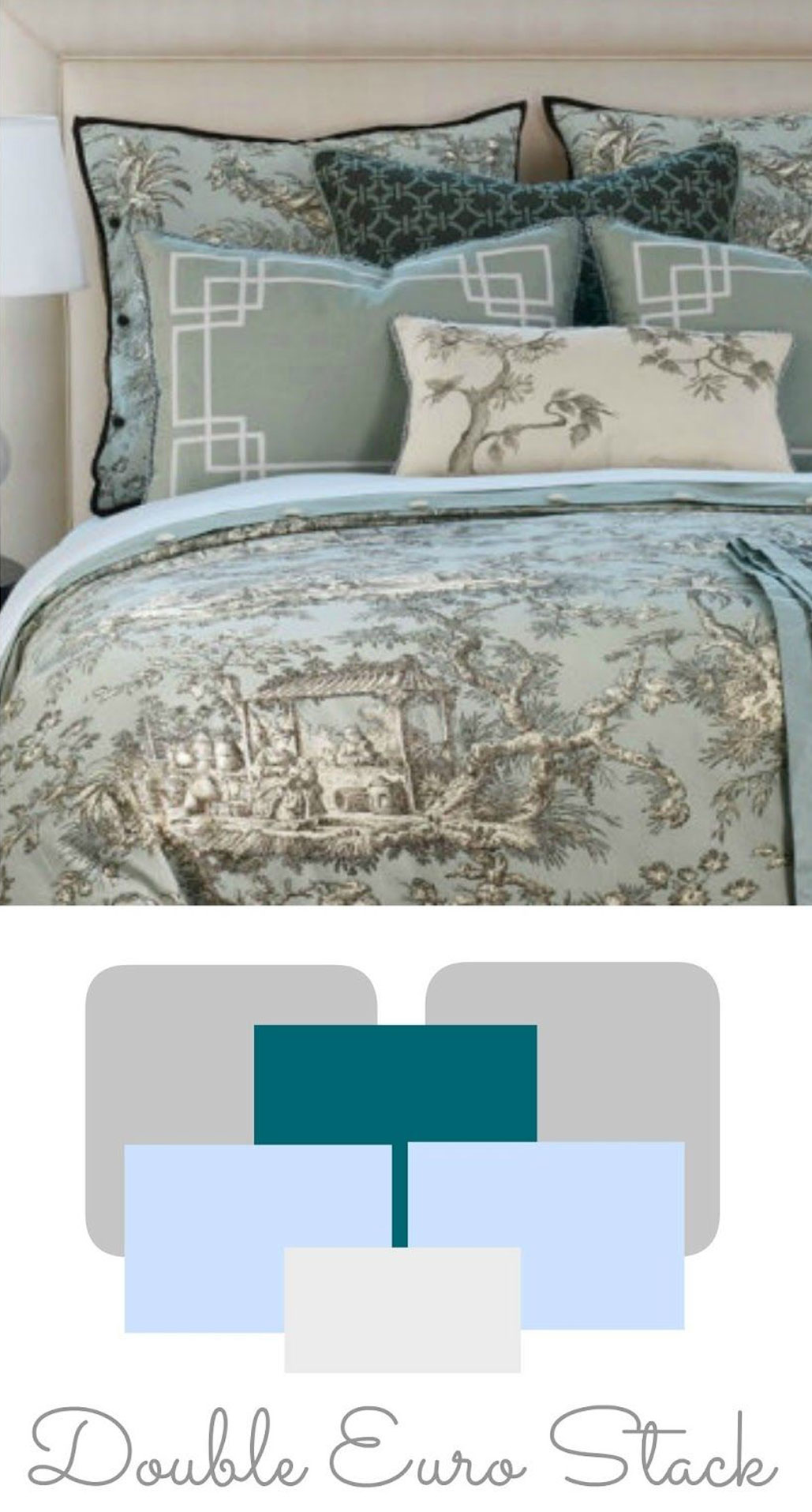 Interior design is one of the most fun, most creative fields out there, and maybe with my experience, I can offer you something you haven’t thought of before.